Hello,
Today I present my second Sprint update.
Last time I did say it was going to be in 2 weeks. well; 4 weeks later, here we are.
So, one of the things is I’m still rather new to this and I have to find a style that works for me. and unfortunately every 2 weeks doesn’t really give me enough time to… do things other than Menu Artisan… so the revision I’m going forward with is going to be 2 week sprints followed by 1 week breaks. So… the next time I’ll be writing one of these will be the 22nd of April. Although I won’t fully  disappear for those weeks off. it gives me the ability to take on side projects. like the one I’ll announce at the end of this page. So without further ado… lets get on with it shall we?

So; the stuff in the two weeks is a lot less grand as the last Sprint. the two things I did was added onto the front end and made working in the future easier for me. so I guess lets start with that.

This one is pretty simple. the Splash screen now has a purpose. to put it easy it takes React’s JavaScript / html mixture stuff (called JSX); and converts it over to plain JavaScript. Now, why did I do this? The answer is simple. to create a better Development environment. It allows me to modularize my JSX code; and also have direct availability to the post-transpiled code in its own files. Basically, it’s to make my life easier.

The other 2 parts I have done is Front-End related.

Anyone Familiar to the Common Event Screen from RPG Maker MV should instantly see that the Event Screen for Menu Artisan is basically the same. The Familiarity is there so that people can more easily jump into Menu Artisan without having to research it. The point of the Devkit is to make this as friendly to newcomers as possible; so that they don’t get turned off from using it. Although, I fear the the familiarity might actually confuse people a bit, so any feedback on this would be great. 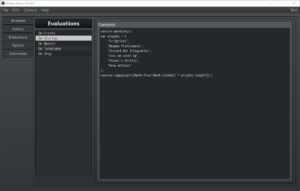 The other Area that was created was the Evaluations Tab. The evaluations tab is similar enough to the Events tab, but deals more with inputting raw JavaScript for more advanced users. The main thing I have planned to change for this in the future is to try and add syntax highlighting in the future. I am looking into good ways to do that now. A current candidate for helping me with that is CodeMirror.

Anyways. That’s  it for the Menu Artisan Devkit. No actual work has gone into the plugin itself; and will probably stay that way until I get the Devkit into something functional. Anyways; a prototype for the new version of the Devkit can be found here.

And finally… for today going to announce my current side project. And its kinda just me messing around. I did a poll a while ago asking people what kind of mechanics they would like to see done as a class for RPG Maker. the 3 I asked for were…

Stamina won the poll; so I’m currently in the process of designing it. Although; here is an image of the old version I made a few years back.

Plus Reizi will have A custom Face Made by Hiranyan(also goes by Ninjanu on DeviantArt).
I was originally planning on releasing this as a kind of tips and tricks kind of style tutorial. but on working on it I kinda maybe rekindled my want to work on games. so I might just end up start making a game using the Class. We shall see.
Thank you for reading this.